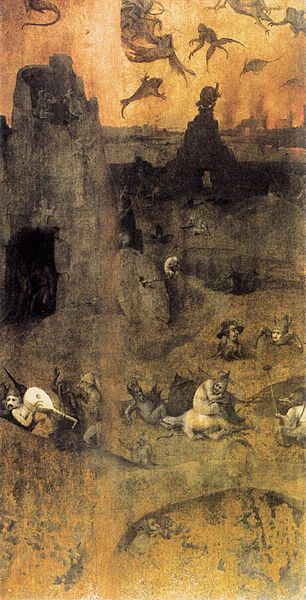 Do you believe that there’s a spiritual war going on?

As you can see, I’ve written one book – fiction – and am well on my way with book two in the Chris Carter Series – about a set of characters and a main character who’s an Iraq War vet who believes that his soul is too much of a mess to be redeemed.  When he gets sucked into an angel/demon conflict he discovers that these two types of beings are actually real.

Of course my books are fiction – I get to have some fun imagining new things and weaving them into my reality.  But it’s important to note that, before the books took off in my imagination, I spent time thinking about writing a book or two that explored what the Bible had to say about demons, angels and men.  Not to mention God himself and the trinity.  In the next few minutes I’d like to unpack just a little about what God’ Word says about these creatures and where we fit in…

Angels and demons are real.  We don’t need to make up a whole lot to find all the drama we need – it’s in the Bible!

Let’s look at Demons first.  From the Bible we know that:

Now let’s turn to the Angels.  Rather than puffy little creatures strumming harps or helping baseball teams win the pennant, they are:

So we see that demons are included with the fallen world that we live in.  They are fully capable of causing trouble, up to and including inhabiting people.  We also see, in the same space, Angels moving between heaven and earth doing God’s will among his chose people and the world at large.

But who is the centerpiece?  It’s Jesus Christ himself.

The Bible is abundantly clear that Jesus walked the Earth as God himself, and controlled demons in a direct fashion including removing them from inhabited humans.  He directed and empowered the disciples to cast them the out on their missionary journey, too.  When Jesus came into the world, angels were ecstatic!  And in many places in the history of the old testament, it is believed that Jesus came in the company of other angels to call judgement or even talk with humans. (Abraham and Sodom, for example).

Jesus died and rose from the grave.  He will return one day, with his angels as captain of the host – move over Michael and Gabriel!  He will ride on t a white horse and vanquish the enemies of god once and for all.

I want to go back and talk about the thing that everybody is warring over – your soul.  You do know that it’s a battleground, right?  I trust you know that.  It’s a thing of great beauty, precious in God’s sight.  He is jealous for your soul!  Yet, we were born outside of the relationship that God intended for us in the garden… our fellowship was broken by the entrance of sin.  And yes, I know that Satan himself was the engineer behind the first sin of Adam and Eve but in reality it was their decision, fateful as it was.

So today, Satan is still at work with his demon soldiers.  Their mission is to disrupt the church of Jesus Christ and break as many humans soul’s fellowship with God as possible.  In many ways, they are doing an effective job, aren’t they?  Today’s society is fragmented by the availability of so many distractions and time wasters…

But what about YOUR soul?  That’s really what I’m here for today – to ask you a simple question.  If you died tonight, do you know to whom your soul belongs to?  Was there a time when you consciously acknowledged your sin-filled nature and asked Jesus to wash you clean of it?  Have you declared your allegiance to Christ publicly by being baptized so that everyone – humans, demons, angels, Satan himself, could see it.

My dad, at times, said that he was “too bad to be saved.”  Do you believe that as well?  I modeled my main character after that – he has his reasons to think so, no doubt, but I surely hope that after the last few minutes together here that you are understanding that YOUR soul, whatever it’s damaged condition, is as precious to God as Adam’s was in the beginning.  Thank God for the second Adam, right?  That’s Jesus whom God brought into the world much the same way (miracle) and who forsook sin, getting it right for the right of us!  Please don’t fall for the lie that your sin has somehow taken God by surprise and that he’s going to cut you off.  He knew you before you were in the womb, people…

So, in conclusion, I hope you’ve picked up a better sense of who the players are in the realms of spiritual warfare, what their goals and characteristics are and why God, His son and let’s not forget the Holy Spirit, why God’s power and will trump all others in this battle.

Who will YOU this day choose???

I’d like to pray for you, if you don’t mind.

God, it’s my prayer for this reader, that they leave with the clear understanding of their worth to you.  You didn’t come, bleed and die for their fingers or toes, but for their souls which are eternal and of great worth to you.  We see in your word that there are principalities and powers moving around us, and that can seem pretty intimidating.  But, when you are for us, who can be against us, truly?  If we are fortunate to meet one of your angelic host, let us take the opportunity to join them in praising and glorifying you Lord, for only you are worthy of our praise!  If there is anyone here who thinks they are too far gone to be saved by your power and love, let them come down an speak to me or another of the folks in front.  If there is anyone here who hasn’t made the choice to take a stand, let them do so today, God.    Let each of us here know with assuredness that we are going to spend eternity with you, long after our physical bodies have been left behind.  Thank you for what you are doing and the wonderful things you will do in our lives… in Jesus’s strong name we pray, Amen