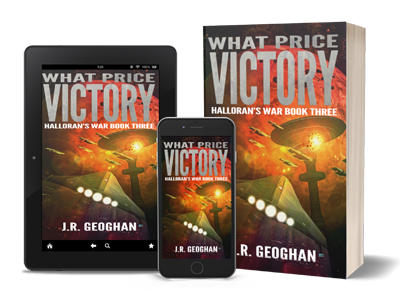 The die is cast. Treachery runs deep as the century-old war between humans and aliens boils over. Will one rogue time-transplanted Captain and his beleaguered crew tip the scales in favor of victory?

As plots against the human and Prax governments reach a crescendo, the beleaguered Premier decides to take an historic gamble on a human of incontrovertible tenacity. And the human Fleet is thrown into open rebellion as a result.

Will Halloran’s gambit succeed, or has he unwittingly condemned his entire race to defeat at the hands of their sworn enemies? And at what cost will he and his lost crew find their way home?

What Price Victory is the thrilling conclusion to the opening trilogy of the Halloran’s War military sci-fi series. If you like tormented captains, embattled ships and crews, space battles and a time-travel twist, you’ll love J.R. Geoghan’s futuristic tale.

Reserve your copy of What Price Victory and follow the tactical plot…or lose your ship!