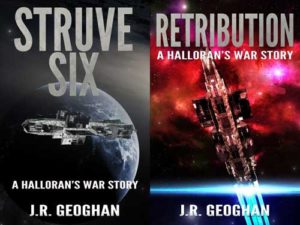 Subscribing to JR Geoghan’s reader community does have its perks, from insider updates and discounts to exclusive, free content!  And, for signing up today, I’ll send you a special subscriber-only Halloran’s War Prequel called “Struve Six” which tells the story of Captain Kendra’s first bloody test of mettle in the battle of Struve Six. I’ll also send you a link to “Retribution” which is a subscriber-only short story of Deacon, Creal and the Haulers that takes place during Book 3 “What Price Victory”

Fill out the form below to get started: