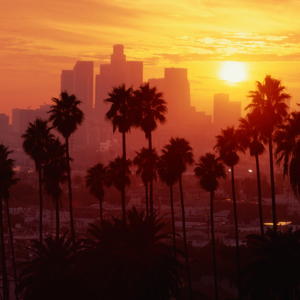 The penultimate showdown in “Swords of Flame” takes place on the Wilshire area of Los Angeles, on the top floors of one of the tallest buildings in the Miracle Mile district and L.A. in general.  The sun is setting as Chris, Sarah and Mac approach in the news chopper… and all Hell breaks loose.  We’re talking guided missiles and gatling guns tearing up condos in sky…

(leaving the rest for you to read)

I used to love visiting the West L.A. area and my job with Robinsons-May Department Stores in the late 1990’s took me there – we had several stores sprinkling through Los Angeles.  While I was more naturally an O.C. guy (give me Laguna any day of the week), I thought the energy in L.A. was invigorating.   Speaking of energy, I distinctly remember standing in a parking structure one afternoon with a coworker when all the cars around us began rocking back-and-forth.  We realized that the building was swaying in a mild earthquake!  Lasted a minute or so but very weird.  Another Wilshire memory is visiting the famous La Brea tar pits – a couple of times.  This is one of the best spots to learn about “real” L.A. history.

In another part of the story, Governor Thomas Gage was visited by a tall mysterious blonde stranger and offered something he couldn’t refuse.  Gage, an ex-movie star, had a gorgeous home in West L.A. overlooking the Wilshire area and the 405 Freeway that he shared with his wife and daughter Angela.  When everyone’s fate ends them up on the top of the shot-up building on Wilshire Boulevard, clearly something bad is going to happen.  Chris and Sarah, our heroes, are from faraway Julian in the San Diego mountains but they need to make things right with the Gages as Swords of Flame comes to it’s climax!